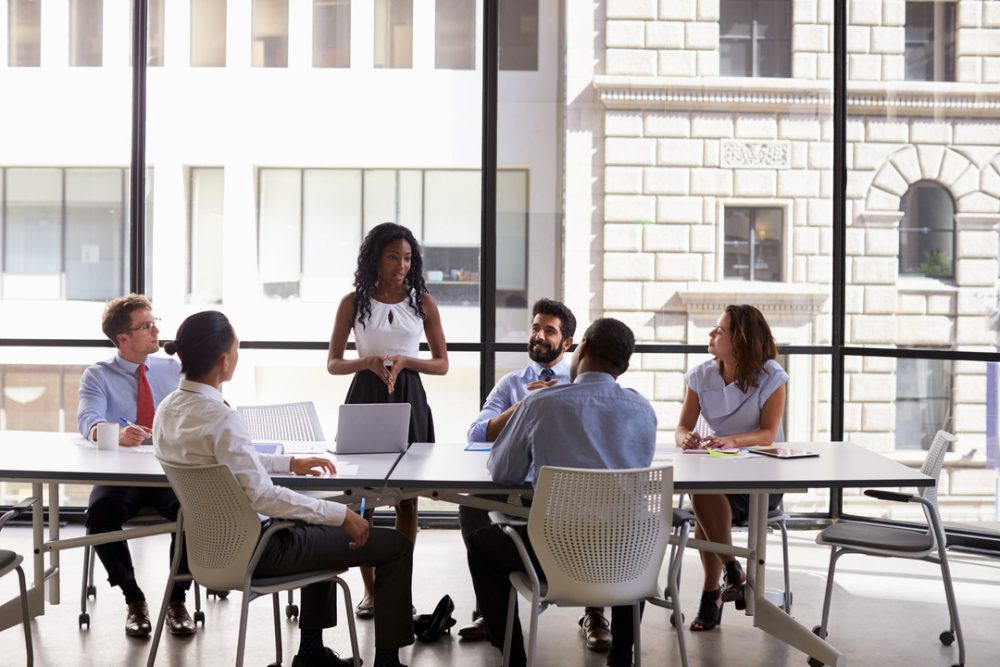 McKinsey’s 2015 study, Why Diversity Matters, states companies in the top quartile for racial and ethnic diversity are 35 percent more likely to have financial returns above their respective national industry medians.

Diversity and inclusion plans have become the “it” thing to help give organizations leverage over their competition. Diversity consultant and TED speaker Vern Myers once stated, “Diversity is being invited to the party; inclusion is being asked to dance.”

As men and women move up the “corporate ladder,” by the time they reach c-suite positions, these roles are filled with 79 percent male executives and only 21 percent of female executives. An even smaller 3 percent are women of color.

When you have a homogeneous work environment, recruiters, hiring managers, and employees tend to look for people who fit into the existing environment— not those who stand out— making diversity recruitment a challenge.

Due to the global call for corporate diversity, for many companies —to satisfy stakeholders or in an effort to innovate and attract high revenues and profits—diversity has become a recruitment tactic. For women of color, “double minorities,” this should be a huge benefit and opportunity for employment.

Sadly, this isn’t the case. Many recruiters don’t understand the impact of race, ethnicity, and gender on the process of employment. Forbes contributor, Erik Sherman, argues that the hiring bias against Blacks and Latinos hasn’t improved in 25 years. In fact, he cites a recent meta-study from researchers at Northwestern University, Harvard, and the Institute of Social Research in Oslo, Norway, stating “Since 1989, whites receive on average 36% more callbacks than blacks and 24% more callbacks than Latinos.”

So, even though some companies are increasing the quality of women of color, they aren’t necessarily creating an environment of inclusion. As a result, Christine Carter states in “We Need To Talk About Dog-Whistle Diversity,” that

… once multicultural women are onboarded, the absence of effective diversity management can make them feel subject to unconscious bias and discrimination. They begin expressing feelings of being patronized, unaccepted and tolerated. Rightfully so. For example, Black women  are more likely to report feeling stalled, and to feel that their talents aren’t recognized by their superiors. The sense of ambient belonging — feeling comfortable in the workplace (accepted, valued, and included) is absent. And when an organization has a low amount of minority executives, multicultural women interpret it as an indicator of barriers to advancement.

Consequently, women of color are more likely to transition out of organizations more frequently as a result of a lack of connection, visibility, and support within companies that have not created a culture of inclusivity at all levels of the organizations.

“ And while D&I initiatives do start with small steps, asking people with multiple identities of marginalization to “wait their turn,” contributes to further inequity.”

The stark contrast of employment and promotion opportunities—not to mention corporate inclusion initiatives—for white women as compared to women of color is a huge sign that diversity and inclusion efforts are not directly benefiting women of color.

At the end of the day, corporations need to realize that diversity and inclusion isn’t just a tactic. And while white women do bring diversity into organizations dominated with white men, the level of diversity is not representative of the country and will not help your organization achieve the innovation and revenue goals industry leaders forecast for diverse organizations.

In fact, in Deloitte’s Diversity Matter’s report, the two key findings from the report are:

Where Do We Go From Here?

Once companies can identify the growing chasm between white women and women of color in the workplace, organizations can begin to create new more targeted initiatives to not only attract qualified women of color but also intentionally create an environment that makes women of color not only feel comfortable and welcome but also lets them know that there are opportunities for advancement, promotion, and professional development. From here, you begin the process of inclusion and for minorities, specifically women of color, research continues to show that feeling included makes a bit difference.